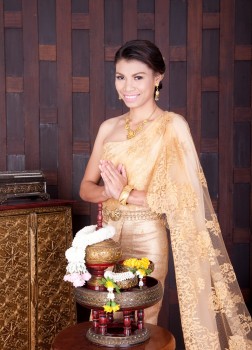 Welcome to the LANNA K website where you can choose Thai massage according to your wishes and make a reservation at one of our facilities. There are working professional, certified masseuses from Thailand in all of our establishments.

To begin with some information about Thai massage. What is Thai massage, which has a health effect and meaning and something from the history of Thai massage.

Thai massage (Nuat Phaen Boran - Thai - นวดแผนโบราณ) is a methodology of work with the body connecting the elements of acupressure and yoga. For many stretching maneuvers are often used descriptions such as "applied hatha yoga" or fancy name "yoga for the lazy." A term describing the best Thai massage is "yoga massage".
Thai massage focuses on the whole body, with the largest effect is concentrated on leg muscles, joints, feet and back, because these are parts of the body, while the most stressed lifestyle.

Traditional Thai massage, known by the word "nuad" has a long tradition of treatment. The theoretical basis of Thai massage is the study of invisible energy lines (Zen), which pass through the human body. Thai massage has selected lines, which lies on important acupressure points of man, and is based on the interaction energy points and energy flow in the body. Influence lines massage releases blockages, promotes unimpeded flow of energy and contributes to good health.

It is used for relief of pain and symptoms of chronic aches and pains of muscles and bones, which have a common cause of bad posture (standing or sitting all day). It can also act as a therapy to fight the consequences of tissue damage and faults caused extensive stress. Many people often surprised at how subtle way can help reduce stress and tension caused by physical disorders.Art "Traditional Thai Massage" requires extensive knowledge of the body, especially bones, tendons, ligaments and muscles.
Thai massage technique consists in forming and bending points, that is not in the kneading. It was pressure on the energy centers - chakras, is medicinal. Masseur gradually presses the patient's entire body of his thumb, heel, knee, forearm or palm.
It was released by extruding blocked lines - meridians, thus reaching the axle. Thai massage can be a little hurt, but only if one has no serious acute or chronic health problems. 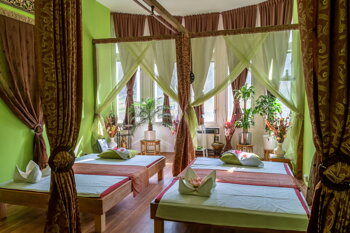 To be effective Thai massage should last two to three hours - this is the ideal time, according to experts. Minimum is one hour. Therefore, it is also sometimes called Thai massage or yoga practice "for the lazy." It takes a while longer than a massage, to what we used in our latitudes, but it is especially nice and always helps. For maximum enjoyment of Thai massage requires full body massage lasting 90-120 minutes. But a 30-60 minute body massage or just legs and feet will bring you a great feeling of relaxation.
Another positive effect is the reduction of stress, improve blood circulation, cleansing the body from toxins and other harmful substances, strengthen the nervous system, revitalization of the total energy and harmonize the body.
Language of our time, traditional Thai massage relieves fatigue, reduces muscle spasms and nervous tension, stimulates blood and lymphatic circulation makes the muscles, joints and tendons loose flexible. 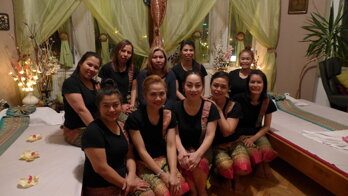 Thai massage performed specially trained therapists from Thailand with years of experience in foreign spa resorts and rehabilitation facilities. The origins of Thai massage dates back to 2500 years back not in Thailand but in India, where he lived physician Jivaka Kumarabhacca, still dubbed in Thailand as the "father of medicine".

Jivaka treated combination of Ayurveda and Yoga, and had such success that magadhský king called him to become his family doctor. Here in the territory of India, Jivaka met the Buddha and his monks. With years of experience and regular meditation gradually developed a completely new healing art, which included nutrition, natural medicine, spiritual practices, and of course massage. After the death in practice Jivakově treatments continued by his pupils and 3 tables pr.nl the massage along with Buddhism came to the territory of Thailand. The then rulers, however, massages provided in newly built churches ban, which ironically helped their expansion. In their continued practice of wandering monks, who transferred from relaxation techniques temples among the common people. Later, at the royal court formed a scholarly style of massage that is a combination medicine of India, China and Islamic traditions, but especially a Zen, acupressure and Ayurveda.